Skip to content
Home » Blog » Staffing in a Time of Uncertainty: An IT Contractor’s Story

“It’s about banding together; it’s about moving forward together.”

He’d made the decision just over a year ago to leave his full time job of 10+ years at a software company in Northeast Ohio, to pursue working as an IT contractor. He had weighed the pros and cons of making such a move, and had spoken with a leading IT staffing company in his area about the opportunities that existed for a developer of his skill level and experience. He also talked it over with his spouse, as the smart ones often do. With all signs pointing to “yes”, he decided to make the move; officially becoming an IT contractor. He also decided to work with the staffing company who had helped educate him on his opportunities; The Provato Group.

For the first 18 months after he and his recruiter had secured his placement, it was exactly what our contractor was hoping for; new opportunities, new skills learned, new challenges to overcome, new technologies to get immersed in. He didn’t realize IT contracting could be as good as this; until it was.

Unfortunately, all good things come to an end…

The news reports began piling up, something about a virus overseas. As the reports mounted, and the news got closer to home, a call came into our contractor from his staffing company. “We’ve got some tough news to share. Due to COVID19, your placement is being terminated.” Devastated, thoughts began racing through our contractor’s head…

“How will I feed my family?” “How will I possibly find another job in this terrible economic downturn? “Did I make a mistake leaving the safety of my full time job?”

Before he could think another stressful thought, he heard the same voice on the line say, “We’ve already started working on finding you another role. We’ve got great relationships with fantastic clients, many of whom need a great resource like you.” “We’ll get everyone on it. It’s about banding together; it’s about moving forward together,” was what he heard next. And it wasn’t just his recruiter who shared this sentiment, multiple resources from the company reached out to share updates and express that they too were working hard to find a new opportunity. In other words, he wasn’t alone.

And it wasn’t just lip service either, within no time Provato had secured a couple of phone screens. Within another day or so the developer was blazing through placement tests he knew he’d have to take, and acing interviews thanks to the prep he did with his main Provato recruiter.

In just over two weeks ’ time from when he got the bad news, he was getting the good news from the Provato team that he had been offered a Lead developer position, at a very prominent local company. A position that would actually provide more for his family than the one he had been laid-off from.

That’s the power of people choosing to move forward together, especially when those people are backed by a proven process, strong client relationships, and a willingness to help others overcome their day to day challenges. That’s the power of Provato. 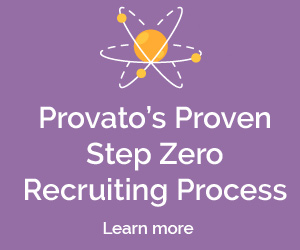